Killing Mexico to Save It

DENISE DRESSER is a columnist for the Mexican newspaper Reforma and a professor at the Instituto Tecnológico Autónomo de México.

MANY IN MEXICO and abroad have begun to think that defeated presidential candidate Andres Manuel Lopez Obrador has simply gone mad. His fiery speeches, his increasingly anti-institutional stance, his decision to create a "parallel government" and name himself the president of it, all seem to suggest a man who has gone off the deep end, dragging the country behind him. Yet there is method to the apparent madness. Lopez Obrador has chosen the path of unabated confrontation because he wants to bring down the government of President-elect Felipe Calderon, or at least make it very difficult for him to govern. Lopez Obrador doesn't want to be the Al Gore of Mexico; he'd much rather be its John Brown.

The slash-and-burn approach Lopez Obrador has taken since the election suggests that he has renounced his presidential ambitions and is not positioning himself for the next race in 2012. Quite the contrary. All of his decisions underscore that instead of governing Mexico, he wants to make sure nobody else can.

From this perspective, his increasing radicalism makes sense: The takeover of Mexico's main avenue and the massive sit-in there. The parallels Lopez Obrador constantly draws between the current situation and the tension that preceded the Revolution of 1910. The push for a national democratic convention that would draw up a new constitution. The refusal to accept the Federal Electoral Tribunal's ruling against him. The calls for peaceful civil resistance, accompanied by the veiled threats of ensuing violence. The recent speech in which he yelled "to hell with your institutions."

All this points to a man who doesn't want to work within the existing institutional framework but wants to burn it down instead. He doesn't want to act in the dignified, responsible and reasonable way that Gore did when the Supreme Court ruled against him. He doesn't want to win elections but to become the combative, critical, radical conscience of a country that is changing, but not fast enough for his taste. He doesn't care whether he reaches the National Palace, preferring to confront its occupants from the public square.

And unmoored by the constraints of conventional politics, he can do what he knows how to do best: fight, denounce, mobilize. Become a permanent thorn in the political system's side. Go down in history not as just another president but as a revolutionary icon like the ones he so admires.

The problem is that by metamorphizing into a modern version of Francisco Villa or Emiliano Zapata, Lopez Obrador may end up hurting Mexico instead of helping it. Mexico is no longer the oppressive dictatorship it was at the turn of the 20th century, or even the authoritarian regime dominated by one party that it was in 1988, when massive fraud against left-wing candidate Cuauhtémoc Cardenas did indeed occur. At least in the electoral arena, Mexico has undergone significant and positive reform, which explains why Lopez Obrador was able to be elected mayor of Mexico City in 2000 and how his Democratic Revolution Party has become the second-largest political force in Congress.

Lopez Obrador is calling for the destruction of a political system in which the left just achieved its largest gains ever. He is undermining the very institutions that his party helped build and are an integral part of.

Lopez Obrador's maximalist, scorched-earth stance runs counter to the kind of modern, tolerant, institutionalized left that Mexican democracy needs. A left that can come up with concrete proposals to combat poverty, fight inequality, promote transparency and push for the reform of institutions that represent entrenched interests instead of ordinary citizens. A left willing to renounce the easy immediacy of confrontation for the difficult, long-term commitment of changing Mexico law by law, institution by institution. A left willing to fight for a better cause than Calderon's political demise.

The kind of deep transformations that will benefit the poor and strengthen Mexican democracy will not occur by merely fueling legitimate grievances instead of addressing them. And Mexico will not end up in a better place if hatred of a flawed political system precludes the possibility of reforming it. Lopez Obrador needs to understand that Mexico's post-electoral crisis should be used to make the country better, not the reverse.
Publicado por Andrés López Rivas en 11:46 p. m. 0 comentarios 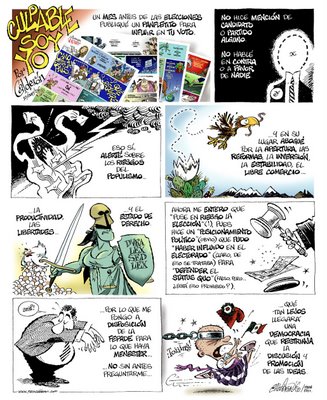