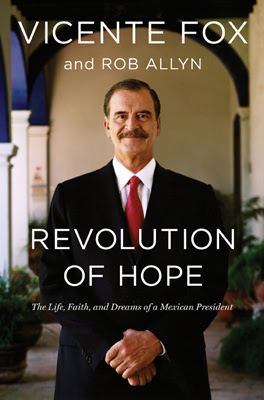 When Vicente Fox swept into office in 2000, he broke the dictatorial one-party rule that had strangled Mexico for over seventy years. A native son of Mexico, grandson of immigrants from the United States and Spain, Fox worked his way from ranch hand and truck driver to the youngest CEO in the history of Coca-Cola. His political rise from precinct worker to world leader was equally swift. As president, Vicente Fox steered Mexico’s fragile young democracy through turbulent times, ushering in six years of economic stability and reform in health care, education, and housing, with increased freedom of the press. His presidency also reduced poverty and tackled corruption.

Vicente Fox embodies the American Dream in its broadest sense as a vision of the New World, as well as the story of Mexico. Elected as a political outsider with a message of honesty, change, and hope, he is truly a world hero of democracy. This vivid book interweaves his inspiring personal story with his bold ideas for the future of the planet.

For the first time, President Fox reveals the ups and downs of his close but rocky relationships with world leaders from President George W. Bush and Prime Minister Tony Blair to Fidel Castro, Vladimir Putin and Hugo Chávez.

In Revolution of Hope, President Fox outlines a new vision of hope for the future of the Americas. He speaks out forcefully on hot global topics like immigration, the war in Iraq, racism, globalization, the role of the United Nations, free trade, religion, gender equity, indigenous rights and the moral imperative to heal the global divide between rich and poor nations.

From the man who brought true democracy to Mexico, Revolution of Hope is a personal story of triumph and a political vision for the future.
Publicado por Andrés López Rivas en 10:29 a. m. 0 comentarios